We arrived a day before the cruise and stayed at the Domus Romana Hotel for 1 night.  This is a 3 star hotel with larger rooms, the front desk staff was very helpful and they had a good breakfast.  This hotel is located on a narrow one way street, so the transfer company dropped us off around the corner so we had to pull our suitcases over the cobblestone side walk and the entrance is hard to see because it is flat to the street and the hotel name is on a same sign on the inside of the opening of the hotel.  This is a busy area during the day, but at night it is quiet.

The Celebrity Reflection is just 1 year old and is a beautiful ship.  The staff on the ship were very friendly, easy to communicate with and very accommodating.  Thy had a variety entertainment from comedians, magicians, hypnotist, singers and their own Celebrity staff shows.  The itinerary on this cruise is really good as follows:

Rome Sept 19 – We booked a transfer through Travel Bound with Euro Travel 2004, you have to walk to terminal 3 to find the sign with your name on it, Delta usually arrives in Terminal 1.   We flew in 1 day early and in the afternoon we walked from the Domus Romana Hotel to see the Colosseum, the Forum, the Pantheon and the Trevi Fountain.  The next morning we went to the Vatican, we took the Metro which was about 5 blocks from the hotel, so we bought an all day ticket for 6 Euros (per person) it is best to have the exact Euros to buy the ticket, no credit cards accepted.  We had booked a guided tour through Travel Bound with Dark Rome for Skip the Line tour.  Dark Rome was a very good company and I suggest to use their services whenever possible in Rome. We booked a transfer with Travel Bound from the hotel to the ship and the ship to the airport with Airport Bus, they picked us up right at the front of the hotel and was right outside when you exit the cruise ship.

Messina, Sicily September 21 – We took a tour to the hilltop town of Taormina, which you can stroll the medieval streets, view Greek-Roman theater, browse exclusive boutiques and have some wonderful views.  You can take a drive through the countryside to the slopes of the volcano Mt. Etna and take a winery tour.  Most tours also stop at Gival jewelry manufacturer, but we weren’t real impressed, because they were very rude, they made sure you were in their jewelry gallery for a period of time before you could leave their property.

Athens September 23 – We took a half-day panoramic tour with a guided visit of the Acropolis, the hilltop complex that includes the Parthenon temple.  They are doing a lot of restoration on the Acropolis at this time to restore a lot of the beauty of this structure.  We also saw the stadium that was used for the closing ceremony of the 2004 Olympics.

Kusadasi, Turkey  September 24 – We took a guided tour to Ancient Ephesus, which is a remarkable archaeological Roman city that included Magnesia Gate, the Odeon, Temple of Hadrian, Library of Celsius and the Grand Theater.  Make sure your tour includes the inside view of the Terrace Houses, which shows the beautiful mosaics, painted walls, the marble walls that they area putting pieces together like a puzzle and the hot & cold water piping they had in these homes.  They also included a presentation on hand made silk carpet-making that takes 6 months or more to make 1 rug about 4 X 6 and cost about $2300.  Also leave some time to walk through the Turkish Bazaars.

Rhodes, Greece  September 25 – This is a wonderful city to walk around and investigate on your own, with a lot of small shops to explore.  Rhodes has 2 distinct districts; the New Town to the north and west and the Old Town, which is surrounded by medieval fortress walls.  We saw the inside of the Palace of the Knights of St. John with its 300 rooms, a moat, drawbridges and watch towers.  You can also see the windmills that used to grind the flour from the wheat that was grown.

Santorini, Greece  September 26 – Santorini is a beautiful island that sits on the top of the cliffs, with all the buildings are white with blue trim.  We took a tour to Nea Kameni to hike to the volcano rim, followed by a sailboat trip to swim in thermal waters.  The thermal waters are heated by the volcano, but they are not real warm.  Then you have the option to take the cable car (cost 6 Euro) to Fira for beautiful panoramic views, shopping and time to explore.   Other options to get to or from Fira is walking up or down the cobble stone steps or take a mule ride.

Mykonos, Greece September 27 – I wasn’t real impressed with Mykonos, this time of the year everything was dry and brown and Mykonos is not real scenic like Santorini.  We decided to go to Elia Beach for ½ day.  They had beach chairs with palapas that you could rent for 6 euros for the day.  The beach area was nothing great and not a family beach because clothing is optional here.

Naples, Italy  September 18 – Naples is not a clean city and we saw several people sleeping on the street and several areas with card board homes.  We took a tour that went to Sorrento, which is a breathtaking coastal town, which has several fun shops. Our tour had a farm tour that talked how they make olive oil in the past and present.  They gave us a demonstration on making mozzarella cheese, then we got to try their wine, fresh salads with mozzarella cheese and breads.  Then our tour went to see the ancient ruins of Pompeii, this Roman city was destroyed by the volcano Mount Vesuvius. 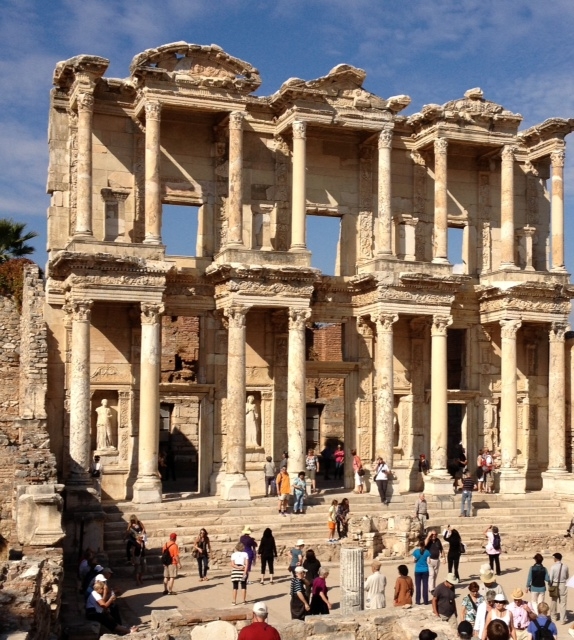