I recently visited London and cruised the North Cape & Norwegian Fjords for 12 days.  What a trip!

We began with two days in London staying at the centrally located Sheraton Park Lane.  We took a full day tour of London that highlighted Westminster Abbey, Buckingham Palace, Tower of London, and The London Eye.

Next we boarded the Crown Princess for 12 day cruise of Norwegian Fjords.  The Crown Princess is 113,000 tons, was built 2006, and has a passenger capacity of 3,080.  This modern ship features spaces like the Piazza style atrium, International Café, Vines Wine & Seafood Bar, Movies under the Stars, and specialty restaurants –the Crown Grill and Sabatini’s.

Stavanger is in the southwest corner of Norway.  Some of the nicest weather is in this area and is a favorite vacation spot for Norwegians.   Don’t miss the Pulpit Rock in Lysefjord that looms 600 meters above Lysefjord.  Lysefjord is 50 miles long and the waters are just as deep as the cliff is high.  In the 1960’s, Stavanger became Norway’s oil capital with refining, rig building etc.

Sognefjord is Norway’s deepest and longest fjord, at 130 miles long and up to 4,291 feet deep.  Flam Railway was completed 1940.  To avoid avalanche, the line crisscrosses the river and the valley floor three times, winding its way along the steep terrain and through the mountain to Flam. The scenery is spectacular.  Nowhere in the world is there an adhesion-type railway on normal tracks with a steeper climb. 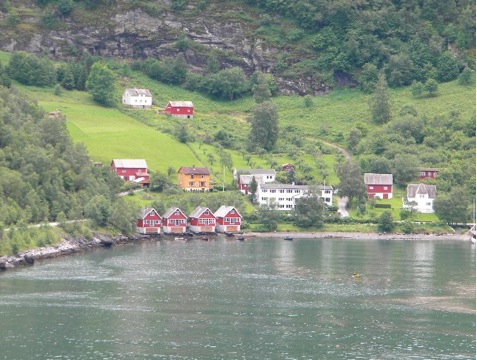 Geiranger – Storfjord is one of Norway’s prettiest fjords, and very narrow.  This fjord is about 60 miles long.  In 2005 the Geirangerfjord area was added to UNESCO’s World Heritage list.  The most popular waterfalls on this fjord are the Seven Sisters and Friaren. We took a motor coach to the top of Mt. Dalsnibba, 4000 feet above sea level.  The summit has spectacular views of Geirangerfjord, and all of the falls. The high temp for the day was 45 F. 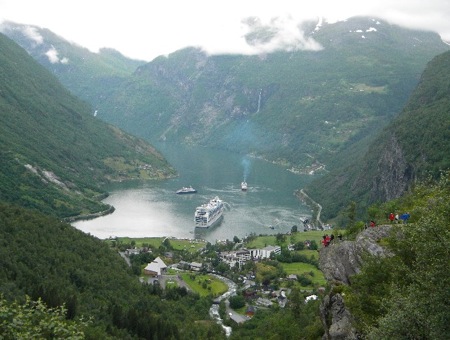 Honningsvag  “The North Cape” has about 200 days of snow or frost each year.  The Gulf Stream assures enough warm current of air and water to prevent a hard freeze most of the time.  During the summer months, vast reindeer herds roam this area with the Sami people.  We also visited the North Cape Christmas and Winterhouse, which offers knitwear and ceramics.  The cottage is decorated with Norwegian decorations.  Here we had about 22 hours of daylight.

Tromso is known as the “Gateway to the Arctic” because of all the polar expeditions that have departed from here.  Tromso has continuous darkness from Nov 17 – Jan 21.  We visited The Tromso Museum which is Norway’s largest museum with exhibits about the history of the Sami people (formerly known as the Lapps).  We also visited the Polaria Arctic Center with exhibits ranging from the IMAX-type film about the remote polar region, a polar aquarium, and an area that simulates the actual conditions found in a polar bear den.

Bergen.  Mt Floien Funicular ride that rises to the summit of 1,050 foot high Mt. Floien.  We then walked from the ship about 30 minutes to the revamped Warehouse district with its many local merchants and great shopping.  The weather was the warmest here at about 75 degrees.

This cruise itinerary had the most beautiful views of the fjords and surrounding countryside.  If you haven’t cruised this area before, you absolutely should!!